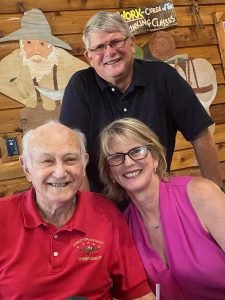 Members and staff of the NSSA are saddened to learn that Lieutenant Colonel Lawrence T. Drennan, Jr., U.S. Marine Corps (Ret), received his final marching orders on Tuesday, October 12, 2021, at the age of 94. He reported to the Heavenly Father and was reunited with the love of his life and wife of 72 years, Irma. Larry, or LT, as he was affectionately known by many, was born July 12, 1927, in Stonewall, Oklahoma, to the late Lawrence T. Drennan and the late Grace Mary Moshier Drennan. Larry attended Stonewall High School, where he starred on the football, basketball, and baseball teams. … END_OF_DOCUMENT_TOKEN_TO_BE_REPLACED