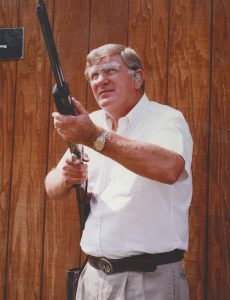 Long-time skeet shooter and NSSA Hall of Fame member Allen "Al" Walker Morrison, Sr., 88, of Newberry, South Carolina, died Monday, August 31. Al was a retired United States Marine Corps veteran, having served during the Korean Conflict, and following his retirement from the military worked as a professional shooter with Hal duPont. He then worked as the Newberry County Veterans Affairs Director from which he also retired. He was a member of St. Luke's Episcopal Church. Mr. Morrison was a Shriner, a former member of the Newberry Rotary Club, served on the Newberry County Council on Aging … END_OF_DOCUMENT_TOKEN_TO_BE_REPLACED

Hold Points   "I’ve been taught the right way to shoot a report pair is to landmark the hold  point and break point for both birds. After breaking the first, go to the hold point for the second, not just to the second bird. Makes sense. But what about a true pair? The second bird is long past its hold point by the time you get there."   You will often encounter a true pair at a given station that is difficult, if not impossible, to engage with the same set of techniques that you would use if the two targets were presented as a report pair. For example, if you had a pair of … END_OF_DOCUMENT_TOKEN_TO_BE_REPLACED

Gun Weight   "I’m a Senior Super Veteran sporting clays shooter, and my shotgunweighs about 10 pounds. At times, halfway through a hundred targets my gun starts to feels slightly sluggish in my move to particular targets. Would I benefit from a lighter gun, and if so, whatwould be a suggested weight?"   What you are feeling is a lack of maneuverability. Weight and balance are the two elements of a shot- gun’s maneuverability.What’s the ideal weight? This is highly individualized; however, I talk to many older shooters with 9+ pound guns looking for something lighter. If you … END_OF_DOCUMENT_TOKEN_TO_BE_REPLACED

Move-Mount-Shoot   "I have read a lot about the move-mount-shoot technique, which my instructor advocates and teaches. I sometimes find that when I try to mount and shoot at the same time, I don’t see the target as clearly as when I ride the target a little bit before I pull the trigger. Can you explain?"   The phrase “Move, Mount, Shoot” was first coined by John Bidwell, a champion British shooter in the 1980s and 1990s. There are many aspects of his writings and technique that I wholeheartedly endorse. There are, however, three points of difference I take with “Move, Mount, … END_OF_DOCUMENT_TOKEN_TO_BE_REPLACED

Barrel Length   "I’m a new shooter. I’m fairly athletic and shoot almost entirely American skeet. What barrel length should I buy for my next gun? 26, 28 or 30 inches? How do you choose?"   Although you are a skeet shooter, I am often asked this question by sporting clays shooters. There are three big factors I takeinto account before recommending a barrel length. First, I need to know the discipline you shoot. For walk-up hunting, skeet, or any other discipline that requires a lot of horizontal gun movement, I recommend a relatively shorter barrel (relative to the second … END_OF_DOCUMENT_TOKEN_TO_BE_REPLACED